I started a challenge.

And it’s been hard for me.

It’s a challenge to not curse anymore. *Difficult would be an understatement*.

Now, I’m not talking about swearing with those four-letter words that we all know. I’m not referring to the words that get bleeped out on television shows or the phrases that elementary kids will say right after hearing it from an older kid and then soon end up with a mouthful of soap. No, I’ve never been a curser like that. But my curse words have a worse effect, I think, then even those ugly words do. Maybe you’re the same–actually, I’d bet money on it that you probably are. 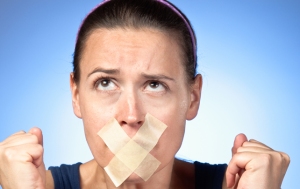 My dad taught me at a young age that “curse words” can literally mean something that curses your life to the point of manifesting something that isn’t really there. “Stupid” was a curse word in our house growing up. If you said it, you better hope that Mom and Dad weren’t around. Or you’d be looking at the corner of the living room wall for five minutes. My dad explained to us when we were little that he was called stupid all his life because he had a learning disability and it was hard to make friends when most of the time he was escaping bullies and trying to disappear. But the words people said to him never hurt as bad as what it felt like when he’d repeat them to himself.

“Never call yourself stupid,” he’d tell us. “You are so smart. You have a world of knowledge in that head of yours.”

And you know what? His rule worked for us.

I grew up always feeling pretty confident that I’m a smart girl. I made it through grade school and highschool and college with A’s and B’s and I’ve always been pretty good at picking things up fast. It wasn’t because I was somehow “above average” in my brain capacity, it was just because I honestly believed I was smart. All my life, that’s all I told myself. It was the only option. But although “stupid” was my curse word–there were some other words that slipped through the cracks and cursed my world, in a manner of speaking.

We all have them. I bet you do too–maybe without realizing it. I sure didn’t for awhile.

And then we become it.

You step on a scale on an otherwise good day and see a number that suddenly deflates you–and instantly the jeans you get into that day feel tighter. You sit next to someone in a waiting room with really GREAT hair and suddenly the bun you threw in your hair upon waking up late makes you feel like an old hag. You get a low grade on a test and half the room got A’s and suddenly–you’re “stupider” than everyone else there.

Not good enough. Or at least that’s what you tell yourself.

But my challenge to myself–and to you, *if you’ll take it on with me*–is to challenge that inner voice. You can’t silence it, because your brain doesn’t turn off like that. But challenge it by saying out loud something positive instead to refute it.

And I know, it’s harder than it sounds.

But we really gotta stop this cursing problem, guys. It’s not making our world–or anyone else’s world–any better.

To some, that may be your weight and height you may be perfectly healthy because that’s just you. And that’s perfect.

But I had an eating disorder. Not many people know that about me–it’s not a very fun conversation piece, so I let it kind of die in the past. But let’s talk about it.

I told myself back then I wasn’t skinny enough. My frame is short, sure, but I’ve always been built to be a little curvy. Not skinny. But I WANTED to be skinny. Because THAT was pretty. THAT was what looked good on TV and on all the cheerleaders that had everyone’s attention.

And so through a strenuous, hardcore unhealthy diet I shed pounds like crazy and told myself this is the only way I look good. This is what I SHOULD look like, I thought. It took a while *and a ton of migraines and hunger pains* before I realized I had been lying to myself and literally cursing myself.

Talk about an abusive relationship–with MYSELF.

And now, 25 pounds heavier and still as short as ever (And I couldn’t help but add a picture with one of my bunnies in it, sorry), I’m getting better at the self-talk and the “I love me how I am” talk, but I still need to improve. Because I still find myself with that old mentality slipping out when I go up a dress size or when I stand next to a six-foot should-be-model at my news station.

Because when I tell myself I’m not good enough–by saying “Man, I need to lose weight. I’m fat” or “I wish I had long skinny legs like my sister and not short little stumps”–I’m building me. And that’s not the way I want to be built.

I know there are situations where you want to improve–maybe your health would be better if you lost weight or you have an acne problem that you strongly want to get rid of. Go for it. Be your best you. But while getting there, also be your best fan. Because come on, it feels better that way anyway.

I’m a firm believer in compliments and the way it can totally change someone’s day. But it’s time to change your own day. Don’t you think?

So stop using that nasty F word. Or S word. Or whatever other word that makes you into something you aren’t.

Let’s start creating ourselves better than that.

7 thoughts on “Fat is an “F” word: And one of the words you seriously need to stop saying”

Join 3,165 other subscribers
Follow all our lemmony things on WordPress.com