I sit here in an empty board room at the end of a hall that connects with a quiet newsroom. It’s quieted down now that the evening show is over. But I still hear a TV that buzzes with life not so far off. Explosions. Yells. Sounds that drift all the way to this boardroom from the streets of Kiev all because of a cable line.

And after an *already* 8-hour day at work I realize that I barely know a thing about what’s going on between Ukraine and Russia right now. I’m embarrassed to say that until tonight, I didn’t give much thought to it, even after hearing about it over and over and over over the headset and e-mails and edited scripts. The riots–the bodies in the street–the screams for freedom– has nothing to do with me.

And that’s the problem. 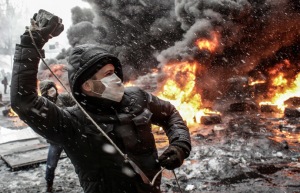 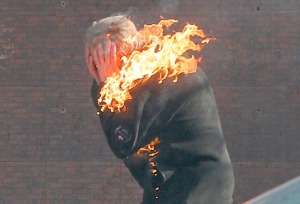 –weren’t alive for me. They haven’t felt real. They’ve seemed like old photographs of a forgotten time–a time when maybe my grandfather was young and and still in military uniform. A time I didn’t have to worry about. The pictures haven’t caught my breath until tonight.

Maybe it has to do with the fact that I’m here alone tonight and without images or pictures or video or subtitles all I hear from across the hall are the pops of explosives, the cries of young people, the sudden plea of what sounds like an old woman with a hoarse, frantic voice. Maybe it has to do with the fact that after curiosity got the best of me I decided to nose around cyberspace and learn all I can about the conflict that has tended to go in one ear and out the other for weeks now. What does that mean for you–someone who has absolutely nothing to do with it?

It actually means a lot. I’m not here to talk about politics. Or foreign relations. Or the billion-something dollars that the U.S. just handed over to Ukraine. Or the side you should pick to be on. I’m not here to argue about policies or who we should help as a country and who we shouldn’t. I’m writing tonight to talk to you about Ukraine and Russia because you’re human and so am I.

And we’re citizens of this world. And that makes all of this our problem.

No, we can’t rise up and solve a crisis overnight. You may not be in a position to hold any political sway or to write to your congressman or to donate funds. But as citizens of this world we’re always in the position to be informed. To face the pictures and the pleas head on and remind ourselves that it isn’t a movie or snapshots from old war photographs–its our brothers and sisters right now. 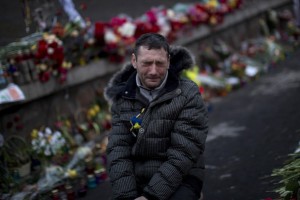 It may sound extreme–I realize that as I’m typing this and switching tabs between this blog post, CNN reports, this viral youtube video of a young Ukrainian girl begging for the world to SEE them–I may sound extreme, but so is the opinion that it doesn’t matter. So is ignorance.

In a politically-driven country and world we get swept up in the rhetoric that boasts, “If it’s not about our country, stay out of it”, or “As long as they’re not bombing us, we’re OK”. We forget who we are as Christians–as fellow human beings that share this earth–and join in the chorus of “If it has nothing to do with me, it’s not my problem”. Or we’re too incapsulated by who’s Democratic, who’s Republican–who believes like we do.

I join in that same chorus too from time to time. And I disappointed myself when I do. Me caring about the issue won’t settle the dispute that rages over who has claim to the Crimean peninsula. It won’t grant Ukraine the government it so desperately cries out for or calm the thousands of Russian troops pinned up against Ukrainian citizens. Here, all the way across the world, I can’t do much to show that Ukrainian girl in the video that I hear her.

But there’s a responsibility to see the suffering–and to get on our knees. 1 Timothy 2:1 simply states: “I exhort therefore, that, first of all, supplications, prayers, intercessions, and giving of thanks, be made for all men.”

Former Ukraine football international Oleg Luzhny said in an interview with CNN, “Everyone is scared about war. They are very nervous. It’s scary for the children, for the adults, for everyone. I hope the world can see what is going on and will speak out.”

It’s not your problem or mine–or so they tell us.

But knowledge is power. So is the written word. So is speaking out or getting involved. So is learning about the things that affect schools and homes and villages across the sea.

And so is getting on your knees, not as a sympathetic American–but as an empathetic brother or sister in Christ.

3 thoughts on “The Russia-Ukraine conflict has nothing to do with you: And that’s the problem”