I hate the word stranger.

Stranger than… what? Stranger than a friend who has been in the picture for twenty-five years, standing as a familiar face in all of your old photographs? Stranger than a sister, or a parent, or a co-worker who spends 10-hour shifts beside your desk?

Strange because…they’re unfamiliar. That’s what it really comes down to, I think. Because nothing else makes them strange.

And it’s always bothered me a teensy bit. So much so that I decided when I was 14 years old–sitting at a lunch table with a ham sandwich and a chocolate milk–that it was an unacceptable term to coin anyone. So I started sitting with the people who sat alone. There was something about watching someone eating alone, eyes lost on their hamburger bun or toward the outside window–that really hurt my heart. And since then, I haven’t changed. You might call it a quirk, and I suppose it is. For a while I even talked myself into believing that I was the only one who seemed to get hurt over someone eating popcorn alone in a theater–or sipping a glass of wine alone in a crowded restaurant. Maybe it was just me.

But then I saw this:

“Are you lonely?”
“It’s been a lifetime of loneliness. I decided early on that I better get used to it. I go to movies by myself. If the movie theater is completely empty, I’m even happier. I learned early on that if I wanted to go to restaurants, I better learn to go by myself. One benefit to being big is that people don’t bother you. I’m shocked that you came up to me. Nobody’s ever done that. When I started to go to therapy, it took me several sessions before I even spoke a word. I’d just sit there and cry. And honestly, you caught me on a tough day. I was sitting here feeling really bad about myself. Because I went to the doctor today, and I was sure that I’d lost weight. But I’d gained some.”

This was featured on Humans of New York. It is by far my favorite website, and I go to it daily to read the stories of people from all over who photographer Brandon Stanton finds randomly on the street and talks to for a few brief moments before taking a picture. I enjoy it because in Brandon’s work I feel that he shares a common belief of mine–that there is no such things as strangers.
In this post in particular, that sticks out to me. This man–a stranger–eats alone, dines alone, and sits alone on a park bench, mulling over the pains of a grueling weight-loss, or weight gain, journey. This man is no different than me worrying over my bills or you worrying over your laugh lines or the man across the park from him who wishes he had someone to talk to. This man is no stranger to the humanity we’re all part of.

I think this topic sticks out so plainly to me, especially now, because society is becoming more and more distant even while technology and communication is attempting to bridge the gap. Our eyes are often lost in cell phone screens, we fail to pick up conversation with the cashier at the store who hasn’t once made eye contact, and the overweight man in Central Park doesn’t have a dinner date simply because he’s a stranger to most, and no one talks to strangers anymore.
We often form too many cliques, get involved in too many social clubs whether it be official or not, and we migrate in groups without opening our arms to those who don’t have a group to belong to. 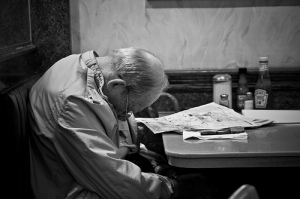 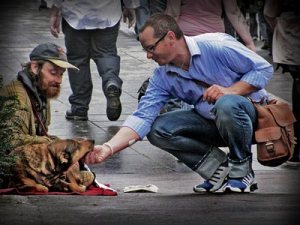 It’s my goal–and I’d venture to ask for you to make it your goal too–to eat alone less often.
To strike up a light-hearted conversation with the busser at your table or the bagger who looks like he’s finishing up a 12-hour shift. To at least smile at the person beside you on the bus and compliment their awesome shoes. It’s my goal to remember that borders, accents, styles, cultures, weights or hairstyles don’t put us into categories, but our unwillingness to accept those differences do. We create strangers.
But why not create more friends? Or at least more opportunities to share a moment of humanity.
After all, there’s nothing strange about being human.

7 thoughts on “I’d rather not eat alone: A thing I’ve learned about strangers”

Leave a Reply to me Cancel reply