I heard Tyler Glenn’s song, “Trash” one night while I was perusing YouTube for new songs to find on iTunes. It was catchy, somewhat soulful, and it took a few seconds before I recognized a familiar prophet as a painting on the wall in the video and I realized what he was talking about. And then I saw other signs–other sacred things–that made my stomach turn. He was talking about leaving the church because he felt “pushed out”.

I watched the video about three times and on the third time, I closed my lap top and realized I was crying.

I wasn’t offended. I wasn’t suddenly outraged. I was sad for him. Very sad.

Many of us, whether LDS members or Buddhists or Pentecostals or Agnostic or whatever else, find comfort where we’re at. Many of us fit in to the lifestyle we lead and love it. We have friends, we don’t have very unique situations (at least not situations that stick out too much) and we have positive experiences that make us stay.

And then there are those like Tyler Glenn, who are hurting and crying out in the form of blogs, music videos, interviews, art, or a slamming door as they walk out.

Since the release of this music video I’ve seen outraged members express distaste for Tyler Glen’s band Neon Trees. I’ve read awful YouTube comments and have seen plenty of blogs or statements contrasting Glenn’s message. And although I get the anger and the pain and the message that these church members are feeling and trying to convey, I think we need to step back. What’s the real issue here? Is it our need to defend ourselves and keep our bubble shiny and untouched, or should it be the need to understand those like Glenn who find themselves outcast, shamed, and lost? 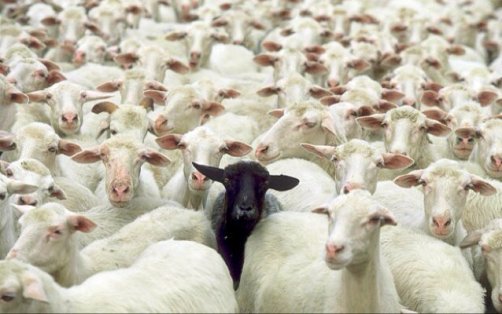 We need to be done sweeping Tyler Glenns of the world under the rug.

When I was in the Pentecostal church I worked as a teacher for the young kids, a lot like I do now in my church. All the kids were behaved, sat where they needed to, and played well with the other children. But then there was Ben (we’ll just call him that for the sake of his privacy). He acted out, he screamed, he bit me so hard once that I had to bandage my hand up afterwards. I couldn’t stand this kid and I breathed a sigh of relief when he wouldn’t show up to church, much to my shame when I look back on it now. He was so different, so misbehaved, so incredibly painful to watch. Even the other kids didn’t want to play with Ben.

But then, one Sunday as I was cleaning up the room and sweeping cookie bits off the tile floor, his parents came in the room to talk to me. They apologized if Ben had been hard to handle. He had developmental issues they told me, and had been in the foster system ever since birth. He had been abused, suffered from lots of delays, and didn’t have many friends. Ben was often sad and would scream out loud and say so in ways that didn’t make sense.

After they left my classroom I remember sitting down and crying. Crying in guilt. In shame. In pain for Ben. And praying that Ben would come back each Sunday, screaming fits and all. Because it was where he belonged and I wanted him there.

I’m not saying Tyler Glenn is a misbehaved child. Obviously he’s not. He is a respected musician who served in the church faithfully and is a grown man. But the analogy, even now, rings true for me.

Why are we still children, pretending these people don’t exist? Pretending like we haven’t been them at one point or another?

Tyler Glenn said in an interview with Rolling Stone, “My entire life and perspective on God, the afterlife, morals and values, my self-worth and my born sexual orientation has been wired within the framework of this religion that doesn’t have a place for me…I served [this church]. I was the square peg trying to fit into the round hole. I believed it till six months ago.”

I understand we can’t lead everyone back. And some people don’t want to be reached out to. I get that. But firing back by saying he’s wrong and that his perception is skewed isn’t only wrong, it’s damaging. What if the sin that you carried, your deepest, darkest secret, was suddenly public knowledge? What if, even by some misunderstanding, you felt like you were a square peg?

I don’t quite understand Glenn’s pain or anger right now. I haven’t been through it. But I know how it feels to not blend in. To work through doubts and pray for the faith to endure. I know how it is to feel anything BUT treasure. I bet you do too.

We’re all treasure, yes. But let’s take a second to look around and see the ugliness and address it and let those who are struggling simply know that we SEE them before preaching and going on rants about how wrong they are to speak out.

I love my church. I love that Christ leads it, and the culture does not. I love that the pure doctrines and truths are completely simple and lead to joy and are not convoluted with opinions and skepticism and misunderstandings that lead to false teachings.

And because I love it, I love who Christ loves.

Tyler Glenn, outspoken angry ex-members, bloggers who have re-blogged my words with fiery come backs, the black sheep, the ones who wail and scream and bite me until I bleed all because they aren’t heard. And I don’t want their trash and their muck to be quickly swept away.

I want to hear them and see them and undo the taboo. I want to fight for them and work toward a day when this happens less and less and even when it does happen, at least we did our part to be the people we need to be.

Because I know without a doubt that Christ would fight for them.

And I know He’d tell us to turn around, to face the ugliness, and to remember that this is our purpose–to go in search after the one.

Note: Edits have been made to protect identities as well as to withdraw a statement I made without realizing it was untrue and that I had misunderstood this person’s message. I appreciate this person reaching out to me to let me know the error and welcome all feedback.

46 thoughts on “No, Mormon members: We can’t sweep Tyler Glenn’s “Trash” under the rug”